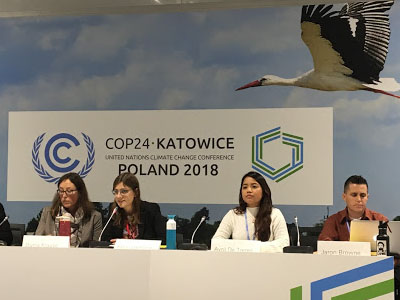 COP24 was a crucial COP. Its main objective was to negotiate and adopt the implementation guidelines of the Paris Agreement (PA). The PA entered into force in such a record time that much of the operational details were left to subsequent negotiations. In 2016 states set themselves the deadline to complete these negotiations at COP24. However, states arrived in Katowice with a huge amount of work as there was still no common ground for much of the operational details. It depends on the very details if the established implementation guidelines are robust, coherent and ambitious. Together with feminist climate activists from all over the world we advocated rights-based and gender-just guidelines. 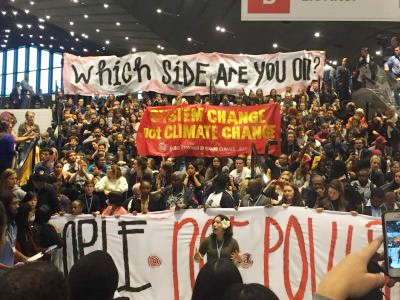 After two weeks of intense negotiations, women and gender groups represented in Katowice assert that COP24’s failure to deliver on the 1.5°C goal and refusal to put people at the centre of climate action exacerbates rather than addresses the challenges facing our planet.

The key objective of COP24 was to operationalise the Paris Agreement on the premise of a vision for rights-based and gender-responsive climate action. The Women and Gender Constituency (WGC) represents people at the frontline of climate change. It has constantly exerted pressure on countries towards an ambitious and people-centered interpretation of the Paris Agreement. It is disheartened at the continued and dangerous dismissal and silencing of the real, system-changing solutions to a just and sustainable world.

Prior to these negotiations, the IPCC Report gave the world a reality check – if we want to reach the goals laid out in the PA, we have to act fast and ambitiously with the appropriate solutions. The opportunity to put people at the center of this vital climate action by including the principles that states already agreed upon, such as protecting human rights and gender equality, was missed. However, communities around the world, including those represented by the WGC, will continue to put into place real solutions, from the grassroots up, to save our planet and people.

training material: ‘Getting ready to advocate for climate and gender justice at COP24’ – August 2018 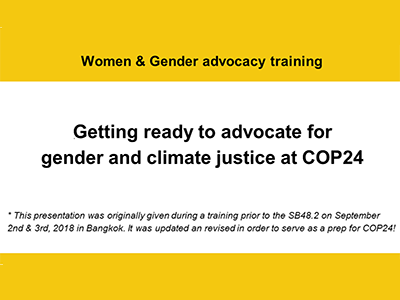 In cooperation with GenderCC we developed the training ‘Getting ready to advocate for climate and gender justice at COP24’ as part of the project activities funded by the Rosa Luxemburg Foundation. The idea was to support civil society activists in the preparation for the upcoming UNFCCC negotiations. This presentation was given to gender advocates prior to the last UNFCCC negotiation round in Bangkok and now has been updated. Civil society advocates are rights-holders! We hope it will give useful guidance in order to advocate people centered climate actions effectively.

The presentation is structured in the following way: Its first part focuses on refreshing knowledge about the UN Climate Change Negotiations key points including instructions on how to read negotiation language. It then summarises how gender equality got integrated and framed in this process. The third part looks at the Paris Agreement, highlights relevant agenda items for the COP24 agenda, and specifically focuses on items we have identified as relevant for the adoption of the implementation guidelines, including recommendations to preserve the spirit of the Paris Agreement.

The Women and Gender Constituency heads to COP24 to demand real, sustainable, transformative change. The WGC has articulated these demands so we can collectively work toward the future they represent.