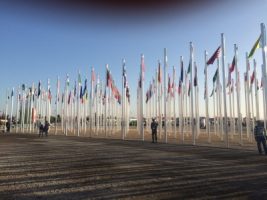 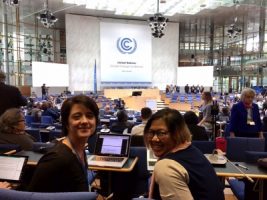 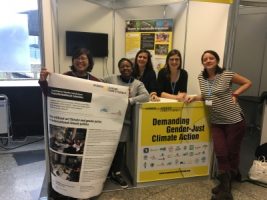 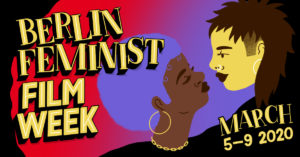 Not without us! on the Berliner Feminist Film Week: Intersectional Perspectives on Climate Justice.

From March 5-9 the Berlin Feminist Film Week will take place. On Sunday March 8 at 18:30 h the movie MAXIMA will be shown, which looks at the climate justice movement through an intersectional lens to ask what role gender, race, and social economic structures play in the climate crisis. MAXIMA tells the true story of the Peruvian indigenous farmer Máxima Acuña who stood up to one of the largest gold-mining companies in the world and triumphed. Afterwards there will be a panel discussion in which Isadora Cardoso will share our experience of the not-without us! – project with climate activism and gender, race and social-economic factors. Some scenes from our movies will be shared as well.

In August 2018 and September 2019, the State of Kerala in India was battered by the worst flood in a century. The floods took away people’s lands, livelihoods, and lives but was met with extraordinary solidarity amongst people and the State. This short film explores women’s lived realities after the floods from the communities in Trivandrum and Alappuzha, and their initiatives as response measures for environment and climate breakdown.

The “Not Without Us: Women & Sexual & Gender Diverse People Experience” documentary shares insight into the lives of Fijian Women & LGBTQI+ community in relation to climate preparedness and response. As active agents of change, the community shares strategies and interventions that builds their capacity and resilience to address climate change injustices. Concept by Tamani Rarama, Fiji.

These are personal stories from local frontline victims of climate change impacts, women, whose livelihoods are affected by the rapid changes in the weather patterns, extreme droughts and flooding. The women are telling their life stories on the social injustices they are faced with and solutions they are introducing at local level with little resources and challenges of gender inequalities. They are highlighting risks women are facing. Also, how coming together as women and being part of a group and/or women’s forum helps to build local resilience and finding solutions to their plight.

Women’s Struggle in the Middle of Climate False Solutions (Indonesia)

In 2019, Indonesia faced forest and land fires, in particular in Sumatra and Borneo (Kalimantan). Until September, forest and land fires in Indonesia reached 857.756 ha, including 630.451 ha of mineral land, and 227.304 ha peatland. This climate disaster is happening every year, and causing a lot of impacts to women, society, and ecology. This video is a story about women in central Borneo, Indonesia. In this area, REDD is implemented, it has a Peatland Wetting Program and it is also a mining region. The fires have multilayered impacts on grassroots women. This video shows a community in Central Kalimantan, in particular women farmers. They are in the heart of resistance, and face to face with the palm oil company on the ground. They share experiences as well as their expectation to stop palm oil and other extractives industry in Central Borneo. Concept by Dinda Nuur Annisaa Yura, Solidaritas Perempuan, Indonesia.

Makana: women in the frontlines fighting the extractive industry and climate change (Ecuador)

Women from the Ecuadorian Amazon fight the oil industry nationally and internationally while reconstructing their lives and communities and heal the land polluted by oil. In the cities, urban women support the fight of the Amazonian women and work for climate and feminist justice. They all fight climate change on the ground. A series of short videos show the life stories of indigenous, peasant and urban women in Ecuador.

“Not without us!” was launched in 2017. Its activities highlight the importance and necessity of gender equality in international and national climate politics as well as within the climate justice movement and its discourses. It focuses on networking and capacity building of women and LGBTIQ* activists from Ecuador, South Africa, Indonesia, Fiji and India.

Togehter the Not without us! team is promoting an understanding of gender justice in different spheres – we are participate in the UNFCCC meetings with side events, actions, interventions and many discussions as well as in the climate justice movement. Together we are connecting local struggles for climate and gender justice with the UNFCCC process, thus enabling networking with other actors. As “multipliers” we are able to translate and communicate the international climate negotiation process back to our own organisations and local contexts at the same time.

At the Climate Camp Leipzig (Pödelwitz) 2019 in the context of the 5th Degrowth Summer School we conducted the workshop ‘A Feminist Approach to Climate Policy & Body Mapping – Learning from Feminists from the Global South’ as part of a 4-day gender & climate change course. The summer school took place in support of the resident resistance in Pödelwitz which is threatened by excavation, as well as of people all over the world whose villages and livelihoods are threatened by the consequences of climate change. The local workshop focused on the application of the Body Mapping Method to the processes of climate change. Together with the participants we explored the method’s use for the empowerment of the climate movement in Germany and for a feminist climate policy agenda. We got to know the method through our colleague Melissa from Ecuador. Its origins are linked to indigenous communities who are known as communitarian feminist.

The project team was invovled in various activities and discussions. Besides advocating gender and climate justice, we specifically focused on the entry points in Article 6, on discussions around NDCs, agriculture and gender just implementation of climate action. Read here for more details.

Webinar: Getting ready for the SB 50 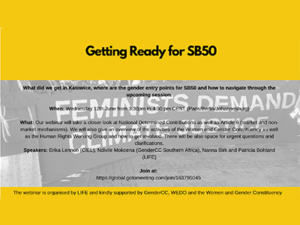 To be well-prepared for the SB 50 we organised a webinar on June 12th for gender & climate justice advocates. It gives an overview of the upcoming session and its gender entry points. It further focusses on Article 6 of the PA and the NDCs and briefly explained the work of the Women and Gender Constituency. The recording will follow soon!

Our team member Melissa Moreano from the Critical Geography Collective of Ecuador produced an exciting short clip. “Not without us! Linking local struggles in Ecuador to COP24” briefly outlines the interlinkages between the negotiations at the international climate change conferences and what is happening in local communities in Ecuador. Watch the video here.

Meet the “Not without us!” team

During COP24 Katowice – we recorded some of our activities. Click here for a snapshot

For the UN Climate Change discussions in Bangkok (SB48.2) in September 2019 we elaborated a training material “Gender Justice Advocacy Training COP24“. This material aimed to provide background information to strengthen gender justice advocates. It provides technical know-how about the possible gender entry points regarding the implementation guidelines. The training was updated for COP24 in Katowice. 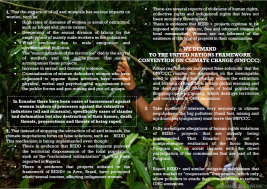 During the local project workshop that took place beginning of November in Amupaking Archidona (Amazonas in Ecuador) indigenous women from the country affected by REDD+ projects came together. They shared their experiences from REDD and its implications for indigenous communities, especially women. At the end of the workshop they produced a manifesto. This manifesto reveals the problems caused by REDD and highlights the women demands. See for the english translation here.

After Dinda Nuur Annisaa Yura (Solidaritas Perempuan), Melissa Moreano (Critical Geopgrahy Collective) and Ndivile Mokoena (GenderCC Women for Climate Justice South Africa) attended their first UNFCCC session they summarised their impressions of the negotiations in a statement. Their statements focus on Agriculture, REDD+ and the discussion around conflict of interests within the UNFCCC.

Melissa: My week at the SB46 of the UNFCCC: REDD+ and oil

Dinda: Conflict of Interest in UNFCCC: Pull Out Polluters from Negotiation

Supported by the Rosa Luxemburg Stiftung (RLS) with funds of the Federal Ministry for Economic Cooperation and Development of the Federal Republic of Germany (BMZ).

Webinar: From local to global